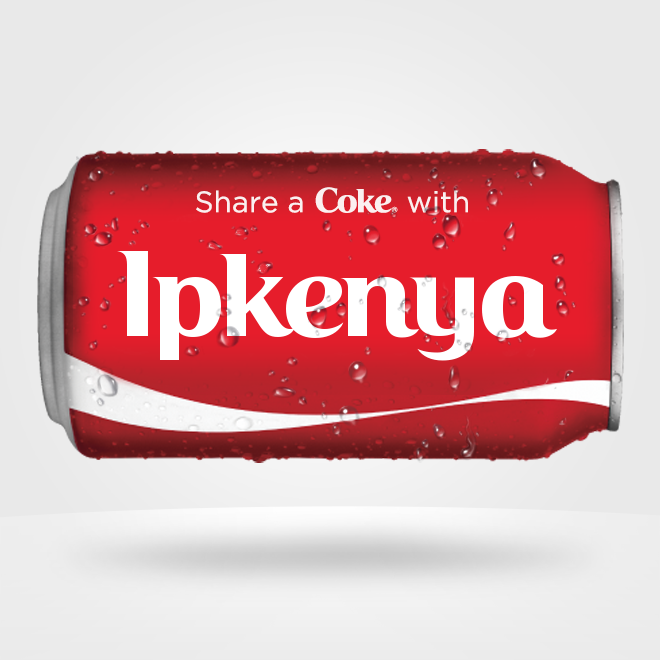 Ever since the “Share a Coke” campaign kicked off in Kenya earlier this month, thirsty fans countrywide have been clamouring to find their names on bottles of Coca-Cola. Some have struck gold, while others have left the store empty-handed. As many may already know, Coca Cola’s hugely successful international promotion “Share A Coke” originally started in Australia in 2011 and has since been rolling out around the world, making its African premiere in South Africa towards the end of 2013. This promotion, targetted mainly at teens and millennials, is intended to allow people to take the Coca-Cola script and replace it with their name on a bottle or can of the well-known beverage. For those with less popular or rare names, the digital version of the “Share a Coke” promotion allows users to create a virtual can with their names which is generated in .png format and available for download and social media sharing.

From an intellectual property (IP) perspective, this ‘de-branding’ campaign by Coca Cola is an eye-opener. It is no secret that the Coca-Cola Company has spent billions of dollars registering, protecting and enforcing its IP rights all over the world. For years, “Coca-Cola”, “Coke”, the Contour Bottle Design and the Dynamic Ribbon Device have been registered trademarks of The Coca-Cola Company. Having gone to such lengths to secure its IP rights, the Coca-Cola Company suddenly ditches the iconic “Coca-Cola” name from its bottles and allows the printing of names and other words on its products?!
Clearly, the Sales and Marketing guys in the room overpowered the Legal types when the idea for this ‘de-branding’ campaign was pitched and approved. While it is hard for an IP lawyer to quantify the risks of free-riding, diminishing distinctiveness, dilution and other harm to the Company’s trade marks as a result of “Share A Coke” campaign, the Sales and Marketing guys will have no problem showing how the campaign has boosted sales, provided the Company with enormous amounts of user-generated promotional content and driven traffic to the Company’s web and social media platforms.

This blogger recently visited Kenya’s “Share A Coke” website and created a virtual can, which is pictured above and available online here: https://ke.shareacokeafrica.com/can/Ipkenya. However, when one looks at the Terms of Use on the site available here, there are two IP-related issues which appear not to have been addressed:

1. What happens when a user creates a virtual can which contains a name which is a third party’s IP rights? The Terms of Use on the site ought to clearly prohibit the use of such names otherwise it may end up being held liable. In this regard, Coca-Cola ought to exercise its best discretion in determining which names may be infringing on third party IP rights.

2. What happens when a user makes commercial use of a virtual can without regard to Coca Cola’s IP rights? The Terms of Use ought to clearly state that the cans are for personal use only, including sharing on social media sites. Additionally, the Terms ought to prohibit any selling of the virtual can or the image on the COKE can. More importantly, the Terms should be explicit that the use of the site to generate a virtual can does not have the effect of granting rights in any of the intellectual property on the COKE bottles and cans, including the rendering of the names.