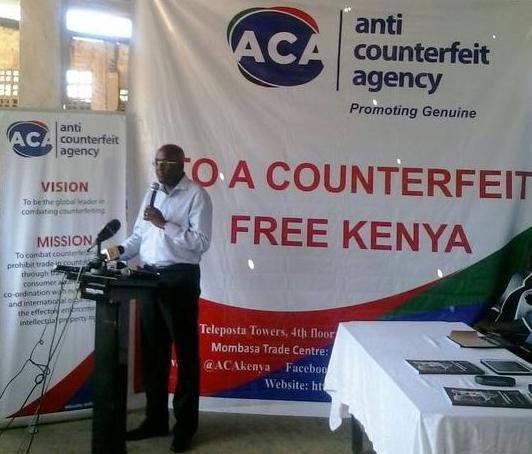 “Whereas the President had the power to appoint the Chairman of the Anti-Counterfeit Agency, that appointment had to be in compliance with the Constitution and the relevant Legislation since, as I have stated herein above, the President in undertaking his executive functions does so on behalf of the people of the Republic of Kenya and has to bow to the will of Kenyans as expressed in their document delegating their sovereign powers to inter alia the executive, the Constitution. It is the Constitution which sets out the terms under which the delegated sovereign power is to be exercised and those to whom the power is delegated must adhere to it…” – Excerpt from the Judgment by Mr. Justice G.V. Odunga on December 16th 2015.

Towards the end of December 2015, the High Court, in one of its boldest judgments yet, struck down President Kenyatta’s appointment of Polycarp Igathe as Chairman of the Anti-Counterfeit Agency (ACA). Last month, the Cabinet Secretary for Industrialisation and Entreprise Development responded to the High Court judgment by (re-)appointing Igathe as ACA Chairman vide Gazette Notice No. 368 published on January 22nd 2016.

**Update (08/02/16): This blogger has been reliably informed that the above (re-)appointment of Igathe by the Cabinet Secretary has been challenged and an order of stay has been issued by the High Court. More details to follow.

In previous posts here and here, this blogger has discussed some of the in-fighting going on at ACA involving certain senior management staff and the Board of Directors under the chairmanship of Igathe. This piece of litigation aimed at Igathe’s removal as ACA Board Chairman appears to be the latest in the on-going power struggles at ACA.

In the case of Judicial Review Application 196 of 2015 Republic v Attorney General & 3 others Ex-Parte Tom Odoyo Oloo, an ex parte application was made before the High Court for orders of certiorari, prohibition and mandamus as follows:

“1. An order of certiorari to bring into this honourable court and quash Gazette Notice No. 2831 dated 17th April 2015 on published on 27th April 2015 appointing the Interested Party [Polycarp Igathe] as the Chairman of the Board of directors of the 2nd Respondent [Anti-Counterfeit Agency].

2. An order of Prohibition to issue against the 1st Respondent [Attorney General], on behalf of the Government, from purporting to appoint the Interested Party as a director of Chairman of the Board of Directors of the 2nd Respondent or any other person whatsoever under the provisions of the state Corporations Act or under any other legal provisions save for the Anti-counterfeit Act.

3. An order of prohibition to issue against the 2nd Respondent from treating or in any other was holding out or according the Interested Party and treatment as a director or chairman of its board of directors on the strength of Gazette Notice NO. 2831 dated 17th April 2015 and published on 27th April 2015.

4. An order of Mandamus to issue as against the 3rd Respondent [Cabinet Secretary, Industrialisation and Entreprise Development] to compel the 3rd Respondent to proceed and appoint the chairman of the board of directors of the 2nd Respondent as required by the Constitution and the Anti-counterfeit Act.”

Readers will recall that by publication of the Kenya Gazette Vol. CXVII dated April 27th 2015 President Kenyatta made several appointments to state corporations. One such appointment was for the Chairperson of the ACA Board which was made vide Gazette Notice No. 2831 in the said Volume and was dated April 17th 2015 and by the said Gazette Notice, the President appointed Polycarp Igathe as the chairperson of ACA. The said appointment was expressed to be made pursuant to section 7(3) of the State Corporations Act, Cap 446. The said Notice also mentioned the Anti-Counterfeit Act, 2008 though it did not cite any specific provision of the said Act.

Section 7(3) of the State Corporations Act under which the appointment was expressed provides as follows:

“Notwithstanding the provisions of any other written law or the articles of association establishing and governing a Board, the President may, if at any time it appears to him that a Board has failed to carry out its functions in the national interest, revoke the appointment of any member of the Board and may himself nominate a new member for the remainder of the period of office of that member or he may constitute a new Board for such period as he shall, in consultation with the Committee, determine.”

However, according to the applicant, the proper criteria for the appointment of a Chairman of ACA is found in Section 6(1) of the Anti-Counterfeit Act, 2008 as amended by the Statute Law Miscellaneous Amendment Act, 2014, which provides that the Chairman of ACA is to be appointed by the Cabinet Secretary from amongst the members appointed under paragraph (h) thereof which provides for two members appointed by the Cabinet Secretary not being public officers, and who hold a degree from a university recognised in Kenya and have at least ten years’ experience in matters relating to (i) intellectual property rights; (ii) consumer protection, or (iii) trade. In other words, the applicant contended that for a person to qualify as a ACA Chairman, he or she must have been appointed under section 6(1)(h) of the Act under which he is required to possess the qualifications stipulated thereunder.

Therefore the applicant submitted that in exercising his powers under section 7(3) of the State Corporations Act, the President ought to have had regard to the provisions of section 6(1) of the Anti-Counterfeit Act, 2008. The court agreed with the applicant and proceeded to itemise the sins of the Executive in making the ACA appointment contrary to the letter and spirit of the Constitution and written laws of Kenya. The well-reasoned judgment of Mr. Justice GV Odunga is available here.

In finding in favour of the applicant, the court ordered as follows:

“1. An order of certiorari is hereby issued bring into this Court for the purposes of being quashed Gazette Notice No. 2831 dated 17th April 2015 published on 27th April 2015 appointing the Interested Party as the Chairman of the Board of Directors of the 2nd Respondent.
2. Having granted the order quashing the decision, it is not upon me to direct the Respondents on manner in which they ought to exercise their discretionary powers. I however decline to grant the prohibitory orders in the manner sought herein.

3. The applicant will have the costs of these proceedings.”

Shortly after this judgment, the Cabinet Secretary who apparently was at work on Christmas Eve, appointed Igathe as Chairman of ACA Board of Directors. This blogger notes that this is perhaps the first time that a Board appointment at one of the IP-related agencies has been challenged in court with such vigour and zeal. For this reason, one may be led to believe that there are forces within or around ACA that are bent on ensuring that things are not business as usual at ACA.