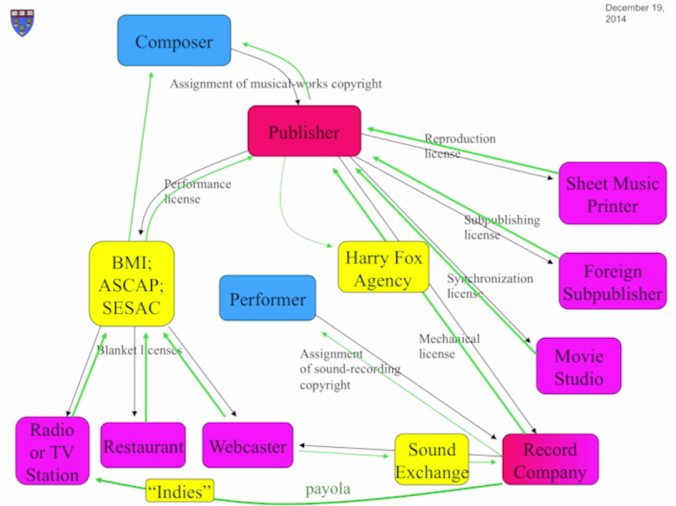 As many readers may know, CopyrightX is a twelve-week networked course, offered from January to May each year under the auspices of Harvard Law School, the HarvardX distance-learning initiative, and the Berkman Center for Internet and Society.  The course explores the current law of copyright mainly in the US but also elsewhere in the world; the impact of that law on art, entertainment, and industry; and the ongoing debates concerning how the law should be reformed. Through a combination of recorded lectures presented by Prof. Fisher, assigned readings, weekly seminars led by yours truly here in Kenya, participants taking the course in Nairobi examine and assess the ways in which the copyright system seeks to stimulate and regulate creative expression.

According to the performance of my class in the CAT, the hardest question was number 20 which only 6.25% of the participants answered correctly. For clarity, statement no. 20 reads as follows:

“20.    If I am the producer of an audio-visual work (eg. a TV commercial) and wish to include a portion of a musical work in my work advertising a US-based mobile operator, I am not required to obtain a synchronisation license from the owner of the sound recording embodying the musical work.”

The words in bold are intended to add emphasis on the portion(s) of the statement that renders it true. As illustrated by Fisher’s chart reproduced at the beginning of this post, synch licenses are obtained from the publisher not the record company.

Statement no. 50 of the CAT also had a 6.25% pass rate. The statement reads as follows:

“50.    In 2012, the US Supreme Court stated that the entities that transmit performances to individuals in their capacities as owners or possessors engage in public performance under copyright law.”

The portion in bold renders the statement false. The case in question is Aereo discussed previously here where the majority opinion of the court reads as follows:

“Neither the record nor Aereo suggests that Aereo’s subscribers receive performances in their capacities as owners or possessors of the underlying works. This is relevant because when an entity performs to a set of people, whether they constitute “the public” often depends upon their relationship to the underlying work. When, for example, a valet parking attendant returns cars to their drivers, we would not say that the parking service provides cars “to the public.” We would say that it provides the cars to their owners. We would say that a car dealership, on the other hand, does provide cars to the public, for it sells cars to individuals who lack a pre-existing relationship to the cars. Similarly, an entity that transmits a performance to individuals in their capacities as owners or possessors does not perform to “the public,” whereas an entity like Aereo that transmits to large numbers of paying subscribers who lack any prior relationship to the works does so perform.”

Similarly, only 12.5%  of my class correctly responded to statement no. 19 reproduced below:

“19.  In the US, an author who composes a musical work and authorises the commercial distribution of one recording of the work still enjoys the moral right of integrity to prevent any other musicians from altering their creations by making and distributing covers, where these covers are different from what the original author had in mind.”

Once again, the words in bold are intended to add emphasis on the portion of the statement that renders it false. In the US, authors of musical works cannot merely rely on moral rights to prevent the making and distribution of covers of their works.

Another equally hard question for my class was determining whether statement no. 33 (with a 12.5% pass rate) is true or false. The statement reads:

“33.    I am US copyright owner of a documentary on Kenyan wildlife which is exclusively available for sale on DVD via my website hosted in the US. I have two target markets: (1) institutions; and (2) individuals. For markets (1) and (2), the purchase prices of a copy of my work are US$200 and $20 respectively. However for market (1), the price is inclusive of public performance rights. Under copyright law, it is easy to effectively enforce all of my rights against both markets thereby allowing me to engage in the above type of price discrimination.”

The above statement cannot be true for the simple reason that copyright enforcement in that scenario is near impossible. As illustrated in Fisher’s lectures, a school teacher or administrator in the US who wishes to buy the DVD for a public viewing at her school would rather buy the DVD online as an individual for $20 as opposed to buying the same DVD on behalf of the school at $200. In this case, there is nothing the copyright owner can reasonably do to curtail each and every unauthorised exploitation of the public performance rights in the audio-visual work.

In statement no. 30, only 12.5% of participants in my class noticed that the correct characterisation of the IP system generally and the copyright system in particular is that it is government intervention aimed principally at protecting producers against competition rather than merely creating legal reinforcement of self-help strategies.

In statement no. 22, only 18.75% of participants in my class correctly identified the import of 17 USC 102(a) which was amended to extend protection to “architectural works” therefore the conceptual separability test is not applicable since the latter test only applies to useful articles. The same percentage of the class also correctly noted that in the US, unlike in many other jurisdictions, the public performance right for sound recordings is limited such that all radio stations, TV stations and large restaurants are not required by law to pay record companies for the use of the latter’s sound recordings unless these users happen to engage in digital audio transmission.

25% of my class accurately answered that statement no. 6 is false because in the US case of Alexander v. Haley, 460 F.Supp. 40 (S.D.N.Y. 1978), the court rejected the plaintiff’s copyright infringement claim on the basis of the scenes-a-faire doctrine by stating as follows: “these are incidents, characters or settings which are as a practical matter indispensable, or at least standard, in the treatment of a given topic. Attempted escapes, flights through the woods pursued by baying dogs, the sorrowful or happy singing of slaves, the atrocity of the buying and selling of human beings, and other miseries are all found in stories at least as old as Mrs. Stowe’s.”

Similarly, 25% of my class accurately answered that statement no. 40 is true since in the case of Community for Creative Non-Violence v. Reid, 490 U.S. 730 (1989), the court considered several factors to determine that the copyright work created by Reid was not a work for hire including the fact that the duration of Reid’s relationship with CCNV was only 2 months. The same percentage of my class correctly spotted the fault in statement no. 44 that in order for the duration of copyright in a work published in 1925 to last until 2020, the work must have been renewed in the 27th  year after its publication namely 1952.

In statement no. 4,  only 31.25% of my class recalled that in the famous Feist decision of 1991, the US Supreme Court rejected the ‘sweat of the brow’ theory in the following statement: “The sine qua non of copyright is originality. To qualify for copyright protection, a work must be original to the author. […] Original, as the term is used in copyright, means only that the work was independently created by the author (as opposed to copied from other works), and that it possesses at least some minimal degree of creativity. To be sure, the requisite level of creativity is extremely low; even a slight amount will suffice.” Similarly, in statement no. 15, only 31.25% of my class correctly noted that an example of non-literal copying is a case where I create a computer program that works exactly like MS Word enabling me to compete with Microsoft but I wrote my own source code from scratch.

37.5% of my class correctly answered statement no. 45 whereby the duration of copyright in the US for an unpublished pseudonymous work is 100 years from the date of creation. This same percentage of the class also noted that in statement no. 10, the basic idea of the “3-step test” in international copyright law was correctly stated however it is rendered false by not stating that the test is broader in TRIPS than it is in Berne. Finally, this percentage of the class accurately affirmed that statement no. 36 is true in light of several judicial opinions including those in the Spike Lee case and the Lindsay case, both of which cite “control” as the most important factor in determining an objective manifestation of a shared intent of putative co-authors that their copyrightable contributions be merged into a unitary whole. The relevant passage from the Lindsay case reads as follows:

“In the alternative, the defendants argue that Lindsay is, at best, a joint author of the underwater footage with RMST. Drawing all inferences in favor of Lindsay, I conclude that no such status existed in the case at bar. With regard to the intent prong of the analysis, “[a]n important indicator of authorship is a contributor’s decision making authority over what changes are made and what is included in a work.” […] In other words, where one contributor retains a so-called “veto” authority over what is included in a work, such control is a strong indicator that he or she does not intend to be co-authors with the other contributor. According to the pleadings, the plaintiff exercised virtually total control over the content of the film as “the director, producer and cinematographer” of the production.”

All in all, CopyrightX is a great learning experience for beginners and experienced copyright practitioners. The reading materials as well as the video lectures are extremely in-depth and engaging.  This course and its content is highly recommended to all readers particularly intellectual property enthusiasts seeking a critical understanding of copyright law.

One thought on “CopyrightX in Kenya: Learning Experiences and Hard Questions”