For more news stories and developments, please check out #ipkenya on twitter and feel free to share any other IP/ICT-related items that you may come across.

For more news stories and developments, please check out #ipkenya on twitter and feel free to share any other intellectual property-related items that you may come across. 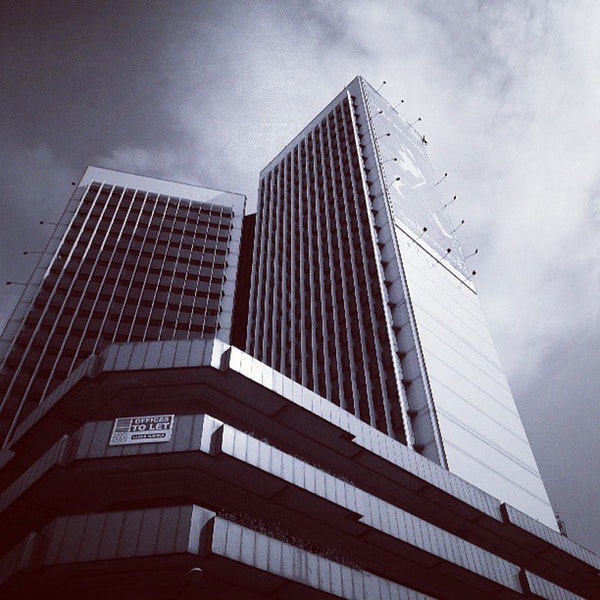 In 2008, Anti-Counterfeit Agency (ACA) was birthed as Kenya’s TRIPS-plus experiment to spearhead intellectual property (IP) rights enforcement by coordinating efforts among various state agencies. In our humble opinion, ACA deserves no score higher than 3/10 for its performance in fulfilling its overall statutory mandate in Kenya.

It was envisioned that ACA would be a shining example of an inter-agency approach to IP rights enforcement with private sector coordination. Ten years later, it is safe to say that ACA has failed to live up to its potential. The reason? Two words: Institutional Corruption.

END_OF_DOCUMENT_TOKEN_TO_BE_REPLACED 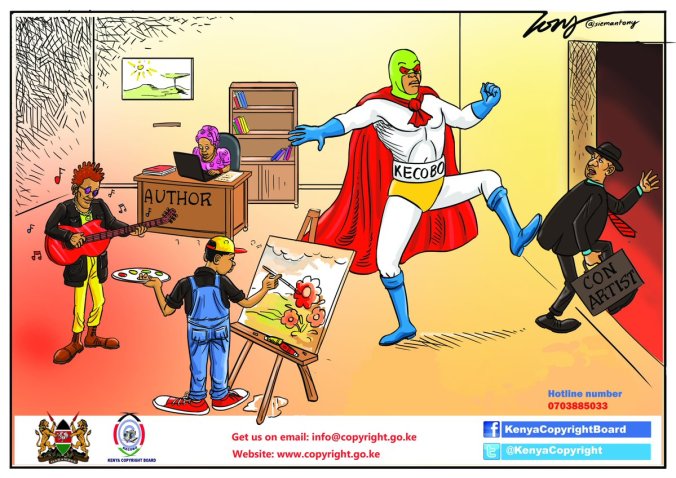 Question: What do the proposed amendments to the Copyright Act in 2017 and 2018 both have in common? Here’s a hint, it has to do with Kenya Copyright Board (KECOBO). In 2017, the Copyright Amendment Bill proposed changes to the functions of the Board, composition of the Board and qualifications of the Executive Director whereas the recently tabled 2018 Bill proposes specific changes to KECOBO Board Membership. Arising from these two sets of proposals less than a year apart, there appears to be a growing call for the repeal or overhaul of the Copyright Act with specific concerns being raised about KECOBO’s Board structure, functions and role within the copyright and related rights system.

END_OF_DOCUMENT_TOKEN_TO_BE_REPLACED

The raison d’etre of  the collective administration or collective management system in copyright law is to bridge the gap between rights holders and users of copyright works. So, what happens when collecting societies, or as they are commonly called collective management organisations (CMOs), fail to carry out this core function and instead become poster children for corruption, mismanagement, lack of transparency, and abuse of power?

Back in 2013, Jonathan Band and Brandon Butler published an insightful article titled ‘Some Cautionary Tales About Collective Licensing’ which exposed the dark side of CMOs around the world. This blogger was pleased that some of our work in the context of CMOs in Kenya was featured in the article, specifically the on-going wrangles between Music Copyright Society of Kenya (MCSK) and literally everyone else including the copyright regulator, copyright owners, copyright users and even other Kenyan CMOs in the music industry.

END_OF_DOCUMENT_TOKEN_TO_BE_REPLACED

Maurice Okoth, former MCSK CEO (left) with his lawyer at the High Court for the delivery of the judgment.

END_OF_DOCUMENT_TOKEN_TO_BE_REPLACED

On the eve of its 40th anniversary, the Harare-based African Regional Intellectual Property Organization (ARIPO) has recently published the findings of a survey on collective management organisations (CMOs) conducted among its member states. A copy of the survey is available here. In the foreword, ARIPO Director General Mr. Fernando Dos Santos explains that:

“The findings [of the survey] indicate that CMOs in the ARIPO Member States are growing in numbers. It was also found that there is growth in collections of royalties and distributions. However, CMOs are also facing challenges which include insufficient or lack of awareness of copyright laws by users and the general public, users’ unwillingness to pay royalties, piracy of the copyrighted works, inadequate resources and manpower within the CMOs and inadequate availability of technologies that can be used by the CMOs.”

END_OF_DOCUMENT_TOKEN_TO_BE_REPLACED 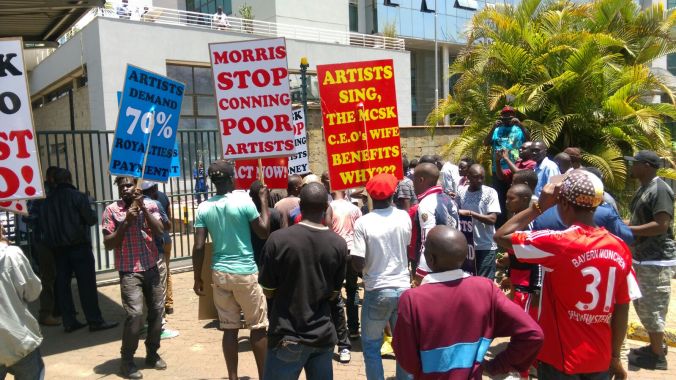 Previously we reported here that several members of Music Copyright Society of Kenya (MCSK) had filed a case in the Commercial Division of the High Court challenging a license pertaining to the caller ringback tones (CRBT) service known as “Skiza Tunes” owned by mobile network operator, Safaricom issued by the three music collective management organisations (CMOs) including MCSK.

While the outcome of this commercial suit is still pending, we have come across a recently delivered judgment in the case of Petition No. 350 of 2015 David Kasika & 4 Ors v. Music Copyright Society of Kenya in which several MCSK members alleged that the collection of royalties by MCSK under the CRBT license agreement in question violates their constitutional rights, that the making available of works for download on Safaricom’s CRBT service amounts to a private performance as such section 30A of the Copyright Act does not apply and thus the CMOs cannot collect royalties on behalf of its members as required under the section. Finally, the petition invited the court to weigh in on several damning allegations made regarding mismanagement by MCSK in its collection and distribution of members’ royalties.

END_OF_DOCUMENT_TOKEN_TO_BE_REPLACED

This blogger has come across the recently reported case of Sijali Salum Zuwa & 4 others v Pamela Akinyi Atieno [2016] eKLR involving a dispute over authorship and ownership of several musical works attributed to the legendary band, Les Wanyika. From 1978 to date, several founding band members have died namely Omar ‘Professor’ Shaban, Issa Juma, Mohamed Tika, John Ngereza and Foni Mkwanyule.The surviving members of the band filed suit in the High Court challenging a grant of letters of administration obtained by Pamela Akinyi, the widow of Shabani over her late husband’s estate including some forty eight (48) songs by Les Wanyika. One such song is “Pamela” (captured in the video at the start of this post) written by Shabani and dedicated to Pamela, who is the defendant in the present suit.
END_OF_DOCUMENT_TOKEN_TO_BE_REPLACED 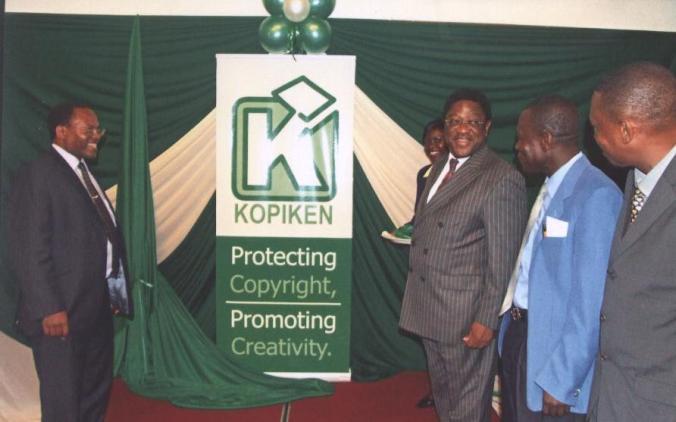 In a public notice by Kenya Copyright Board (KECOBO) published on February 4th 2016, we are informed that KECOBO at its Board Meeting of January 28th 2016 considered the application for renewal of registration as a collecting society made by the Reproduction Rights Society of Kenya (Kopiken). After consideration of Kopiken’s application, KECOBO decided not to renew Kopiken’s registration. This means that as of January 1st 2016, there is no registered collecting society for reprographic rights in Kenya. In this regard, KECOBO in its public notice states as follows: “KECOBO will be consulting stakeholders of KOPIKEN to determine its future sometimes (sic) in March 2016.”
END_OF_DOCUMENT_TOKEN_TO_BE_REPLACED

IP Kenya Blog by Victor Nzomo is licensed under a Creative Commons Attribution-NonCommercial 4.0 International License.
Permissions beyond the scope of this license may be available at https://ipkenya.wordpress.com/hello/.
IP Kenya
Blog at WordPress.com.