On 27th October 2016, Prof. Sihanya announced the arrival of his long-awaited book titled: “Intellectual Property and Innovation Law in Kenya and Africa: Transferring Technology for Sustainable Development”. The self-published tome is just shy of 700 pages which is not surprising since it rehashes Sihanya’s entire body of work dating back to his 1991 LL.B dissertation. Unapologetically, the self-proclaimed “Father of IP” uses his new book to trace his two decade-long journey of training, research and teaching in intellectual property (IP), complete with footnote references to private class materials from his studies at Warwick and Stanford in the 1990s. Despite all its quirks, the book stands out as the first serious attempt by an African scholar to discuss the development and challenges of IP law, innovation and technology transfer in Kenya. There is no doubt that the book has laid the foundation for future work in IP law across the country for generations to come.

END_OF_DOCUMENT_TOKEN_TO_BE_REPLACED

In previous blogposts here, we have tracked the development of this law aimed at creating an appropriate sui-generis mechanism for the protection of traditional knowledge (TK) and cultural expressions (CEs) which gives effect to Articles 11, 40 and 69(1) (c) of the Constitution. This blogpost provides an overview of the Act with special focus on the issues of concern raised previously with regard to the earlier Bill.

END_OF_DOCUMENT_TOKEN_TO_BE_REPLACED

On the eve of its 40th anniversary, the Harare-based African Regional Intellectual Property Organization (ARIPO) has recently published the findings of a survey on collective management organisations (CMOs) conducted among its member states. A copy of the survey is available here. In the foreword, ARIPO Director General Mr. Fernando Dos Santos explains that:

“The findings [of the survey] indicate that CMOs in the ARIPO Member States are growing in numbers. It was also found that there is growth in collections of royalties and distributions. However, CMOs are also facing challenges which include insufficient or lack of awareness of copyright laws by users and the general public, users’ unwillingness to pay royalties, piracy of the copyrighted works, inadequate resources and manpower within the CMOs and inadequate availability of technologies that can be used by the CMOs.”

END_OF_DOCUMENT_TOKEN_TO_BE_REPLACED 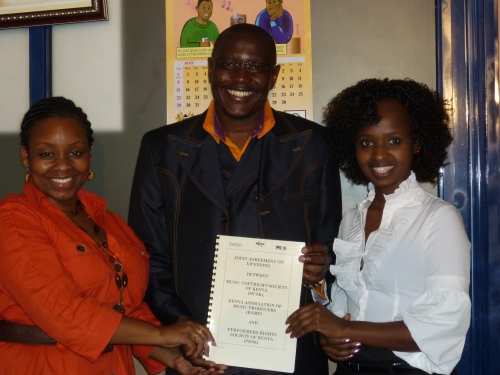 Currently, copyright and related rights licensing within the music industry generates approximately Kshs 308 million in total. From this total income, MCSK takes home over 80% with the remaining 20% shared between the related rights CMOs: KAMP and PRiSK. If you ask any of the CEOs of these three CMOs (pictured above), they will tell you that collecting just over a quarter million in license fees is barely scratching the surface of the millions of shillings in uncollected royalty payments. However, the singular challenge in collecting these missing millions has been the division among the three CMOs.

KECOBO, the government regulator of CMOs, has midwifed several failed attempts to structure a joint partnership between these three CMOs with the most notable attempt in April 2011 with the support of the Norwegian Copyright Development Association (NORCODE). The bone of contention appears to have been whether the three parties ought to be treated as equal partners in the joint revenue collection venture. At the time, this blogger was an observer and recalls that MCSK seemed particularly opposed to the idea of “a partnership among equals” for several valid reasons.

Out of this failed attempt, the seed of partnership appeared to have been sown between the related rights CMOs – KAMP and PRiSK. In July 2011, the Boards of KAMP and PRiSK agreed to start a joint collection exercise for revenue from Communication to the Public Stream of Revenue on a commission basis. Two years, KAMP and PRiSK are now carrying out joint royalty collections countrywide. The two CMOs are also sharing offices and other resources including staff which has drastically reduced their operation costs allowing them to have more income for royalty distribution to their respective members.
The related rights CMOs also appear to have been the biggest beneficiaries of the 2012 amendments to the Copyright Act which introduced the right to equitable remuneration under section 30A.

It is for this very reason that this blogger has been particularly harsh on KECOBO for not ensuring that the Copyright Tribunal is up and running. This Copyright Tribunal is vested with powers under the Copyright Act to hear and determine matters brought by users relating to CMO tariffs and other license conditions. In the meantime, the average user of music in Kenya must contend with two sets of royalty invoices, one from MCSK and another KAMP and PRiSK. This prevailing situation has resulted in increased hostility and resistance from users who feel overburdened and thus refuse to pay license fees all together.

In addition to pushing for the setting up of the Copyright Tribunal, this blogger submits that KECOBO should actively encourage the amalgamation of the collecting societies operating within the music industry for the sake of the overburden users of music in Kenya. One viable option for KECOBO would be to amend the Copyright Act to allow for the voluntary amalgamation of two or more registered CMOs. Such an amendment would allow for several CMOs to form one single CMO while remaining registered companies limited by guarantee. This proposal is inspired by section 71 of Uganda’s Copyright and Neighbouring Rights Act of 2006 which reads as follows:-

(1) Any two or more registered societies may, with the prior approval of the Registrar, amalgamate into a single society.

(2) An amalgamation referred to in subsection (1) shall not take place unless—
(a) a general meeting of each of the societies has been called;
(b) each member of the society has had a clear notice of fifteen days of the meeting; and
(c) a preliminary resolution has been passed by a two-thirds majority of the members present at the meeting for the amalgamation.

This proposed amendment to Kenya’s Copyright Act would send a strong and clear message to the user that KECOBO supports the growing public sentiment against a multiplicity of registered CMOs levying fees for the same or similar works. Such a legal provision would also enable members to put pressure on their respective CMOs to amalgamate and create a one-stop shop for licensing of their rights and distribution of royalties. 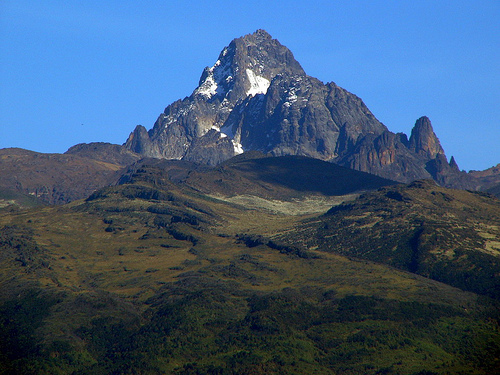 The following main challenges can be cited.