This blogpost has been prompted by two recent developments in Kenya and Namibia. In Kenya, the High Court recently delivered a ruling in the case of Music Copyright Society of Kenya Limited & another v Multichoice (K) Limited & another [2016] eKLR in which the court dismissed the copyright infringement suit filed by the collective management organisation MCSK against Multichoice. Meanwhile in Namibia, a recent report here reveals one of the reasons why Southern African Music Rights Organisation (SAMRO) which receives royalties from Multichoice has failed to distribute them to other concerned African copyright societies.

END_OF_DOCUMENT_TOKEN_TO_BE_REPLACED

In the above public notice in today’s newspaper, Music Copyright Society of Kenya (MCSK) states as follows:

“This is to inform the general public that Mr. Dan Maurice Okoth resigned from his position as the Chief Executive Officer of MCSK. Mr. Okoth ceased to be an employee of MCSK from 24th March 2016. He is therefore, not authorized to transact any business in the name of or on behalf of MCSK and that MCSK shall not take responsibility for any transactions made by him”

END_OF_DOCUMENT_TOKEN_TO_BE_REPLACED

This blogger has come across the recently reported case of Sijali Salum Zuwa & 4 others v Pamela Akinyi Atieno [2016] eKLR involving a dispute over authorship and ownership of several musical works attributed to the legendary band, Les Wanyika. From 1978 to date, several founding band members have died namely Omar ‘Professor’ Shaban, Issa Juma, Mohamed Tika, John Ngereza and Foni Mkwanyule.The surviving members of the band filed suit in the High Court challenging a grant of letters of administration obtained by Pamela Akinyi, the widow of Shabani over her late husband’s estate including some forty eight (48) songs by Les Wanyika. One such song is “Pamela” (captured in the video at the start of this post) written by Shabani and dedicated to Pamela, who is the defendant in the present suit.
END_OF_DOCUMENT_TOKEN_TO_BE_REPLACED 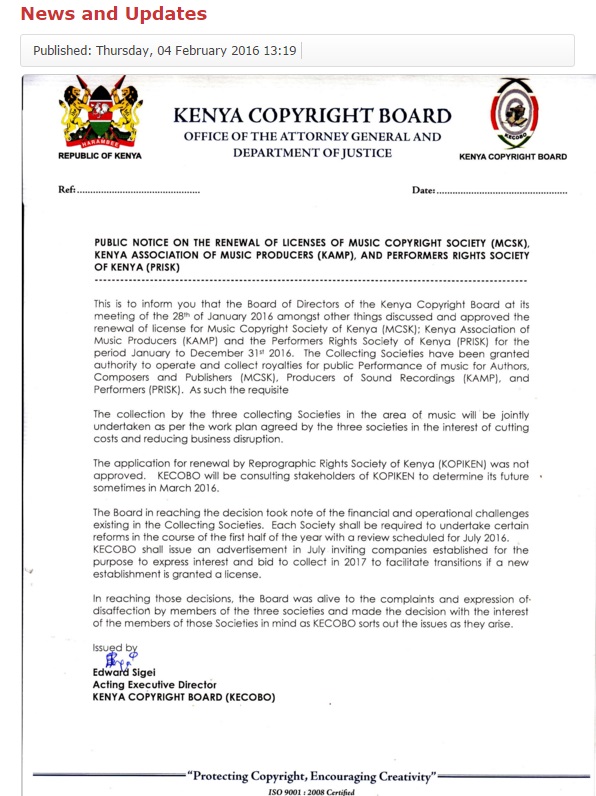 Last week, the ever-busy Kenya Copyright Board (KECOBO) published a public notice stating that it had approved the renewals of registration as collecting societies for Music Copyright Society of Kenya (MCSK), Kenya Association of Music Producers (KAMP) and Performers Rights Society of Kenya (PRiSK) for the period January 1st to December 31st 2016. According to KECOBO, the collection by the three collecting societies in the area of music will be “jointly undertaken as per the work plan agreed by the three societies in the interest of cutting costs and reducing business disruption.”

Further, KECOBO explains that: “Each [collecting] society shall be required to undertake certain reforms in the course of the first half of the year with a review scheduled for July 2016. KECOBO shall issue an advertisement in July [2016] inviting companies established for the purpose to express interest and bid to collect in 2017 to facilitate transitions if a new establishment is granted a license.”

For KECOBO and the collecting societies this is no mean feat given the long journey thus far towards a single license regime for users of musical works and sound recordings in Kenya. However, KECOBO’s notice leaves out some crucial details which will ultimately determine whether this latest attempt at joint collection will succeed or fail.

END_OF_DOCUMENT_TOKEN_TO_BE_REPLACED

Recently, Kenya Copyright Board (KECOBO) published on its website here the proposed 2016 collecting society joint tariffs for musical works, sound recordings and audio-visual works. A copy of these joint tariffs is available here. In order to ensure public participation before the approval of these tariffs, KECOBO will convene an open half-day public forum to be held next week on February 10th 2016 at the Auditorium of NHIF Building starting at 8:30am.

This blogpost will focus on the tariffs for sound recordings since they have recently been the subject of thorough debate and analysis in South Africa’s Supreme Court of Appeal. It is hoped that the South African experience will be useful to Kenyan users in their negotiations with collecting societies on reasonable tariffs to pay for use of copyright works.

END_OF_DOCUMENT_TOKEN_TO_BE_REPLACED

This blogger has recently come across an astute ruling by the High Court in the case of Music Copyright Society of Kenya v Chief Magistrate’s Court & Inspector General of Police [2015] eKLR. Justice L. Kimaru sitting in the High Court was approached by the authors’ collecting society, Music Copyright Society of Kenya (MCSK) to stay orders issued by the Magistrate’s Court freezing all the bank accounts of MCSK following a request by the Serious Crimes Unit under the Directorate of Criminal Investigations (DCI). DCI requested that MCSK’s accounts be frozen as it investigates complaints made by MCSK members in regard to alleged misappropriation and theft of funds at the collecting society.

After carefully evaluating the facts before him, Kimaru J ruled that the investigations were lawful and based on several complaints received by DCI from MCSK members and that the orders to freeze MCSK’s accounts were within the precincts of the law.

END_OF_DOCUMENT_TOKEN_TO_BE_REPLACED 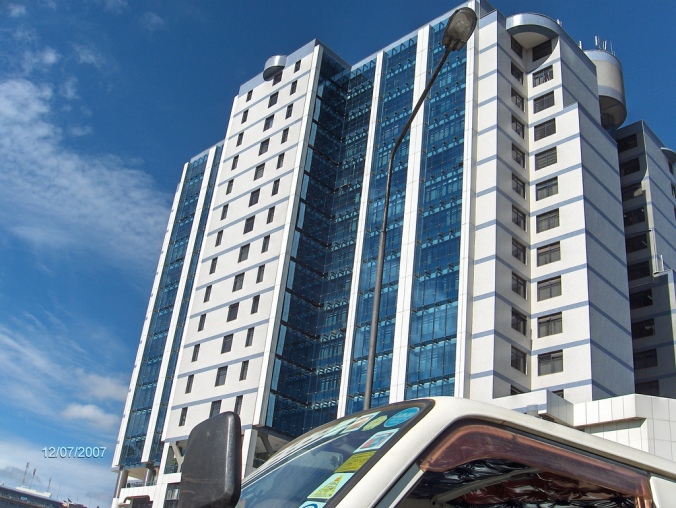 Recently, the Statute Law (Miscellaneous Amendments) (No. 2) Bill, 2015 was published in Kenya Gazette Supplement No. 165 (Bills No. 58). The Bill seeks to one section of the Copyright Act, namely section 30(8). A copy of this Bill is available here (See pages 3229-3230). This proposed amendment inserts the following words at the end of the section: “and the compensation shall be collected by the Board and distributed to the respective copyright collecting society registered under section 46.”
According to the Memorandum of Objects and Reasons in the Bill, the proposed amendment to section 30(8) is intended to provide for structured compensation of performers and producers of sound recordings for private copying of works in line with international norms and practices.

END_OF_DOCUMENT_TOKEN_TO_BE_REPLACED

IP Kenya Blog by Victor Nzomo is licensed under a Creative Commons Attribution-NonCommercial 4.0 International License.
Permissions beyond the scope of this license may be available at https://ipkenya.wordpress.com/hello/.
IP Kenya
Blog at WordPress.com.