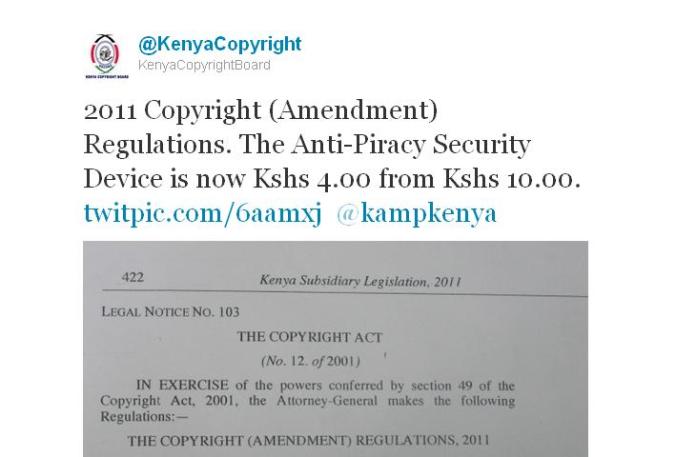 Today the Kenya Copyright Board (KECOBO) officially announced via twitter and on its website the much anticipated reduction of the price of the Anti-Piracy Security Device (APSD).

The issue of the APSD price was raised during the Music Stakeholders’ Consultative Meeting organised by KECOBO in June 2011. KECOBO reported that it had carried out a study on Music Piracy in Kenya which revealed that the level of piracy was at a staggering 95%. This high rate of piracy is cited as the main reason the APSD was introduced pursuant to section 36 of the Copyright Act which deals with authentication.

The APSD is made up of two separate labels: 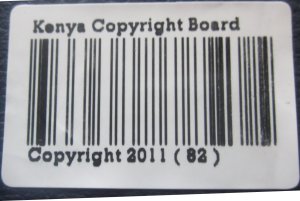 Firstly, there’s the Barcode (pictured above) which contains critical information of the registered copyright works. 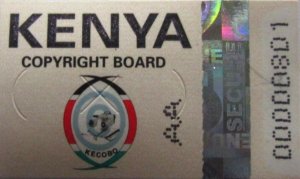 Secondly, the Hologram sticker (pictured above) which contains a number of security features and is unique to each registered copyright holder

1) The price of the APSD at Kshs. 10 was widely considered as expensive.

2) Whether they are plans to introduce a version of the APSD to deal with digital piracy of copyright works?

3) Whether the revenue from the APSD could be put in a consolidated fund to be used for artist’s welfare?

Although most music users were adamant that KECOBO should lower the price of the APSD to Kshs 2.00, the new price of Kshs 4.00 from the previous Kshs. 10, is indeed a sign of compromise on its part.

However with pricing issue 1) out of the way, KECOBO still has the issues raised under 2) and 3) to address.

In addition to these, KECOBO must work more towards instilling confidence in music users that the APSD actually plays a significant role in curbing piracy of their copyright works.

More fundamentally, issues have been raised with the requirement copyright registration itself. Under section 36 of the Copyright Act, registration is mandatory for any person intending to sell audio-visual works or sound recordings. Is this a violation of the Berne Convention? I’ll share my thoughts on that another day.